BACK TO ALL ARTWORKS
046

singed, titled and dated on the verso

Good condition.
There are a few minor traces of paint in places, which are thought to be an original condition of the artwork. Paint has peeled off at the tips of the wood.
Singed, titled, and dated on the upper part of the verso.

Suga Kishio (b. 1944) is a representative artist of the Mono-ha movement which emerged from around the 1970s. The critic Minemura Toshiaki has defined Mono-ha as the following: “By placing unprocessed, natural[istic] materials and objects (mono meaning “thing”) onto the platform of artistic expression, these group of artists attempt to extract an artistic language directly from the presence as well as the movements of these things” (Kamakura Gallery, 1986). Suga is an installation artist still working to this day, and as indicated by the representative work of his early career ‘Infinite Situation’ (1970), a piece of plywood holding up a sash window, Suga’s work emancipates objects from the means of subjectivity and artistic expression of humans and attempts to make visible the “things that are indispensable to things”, in other words, the “state of an object” (Suga, 1969). “Creating circumstances where things become things is the origin of thought” (Suga, 1979).
The work being presented this time is one of his wall-works that Suga has made alongside with his sculptural installation works. The three sticks in this work are painted green, and the stick on the right, while aligned at the top with the other two sticks, hangs over the shelf the sticks are placed on. At the end of the viewer’s line of sight is a situation where a shelf, as close to two-dimensionality as possible resides within a three-dimensional space and its subsequent time-lapse. The title which Suga has given this piece, ‘JŌYŌKA [場用果]’ character by character creates a point of embarkation for the interpretation of this work. 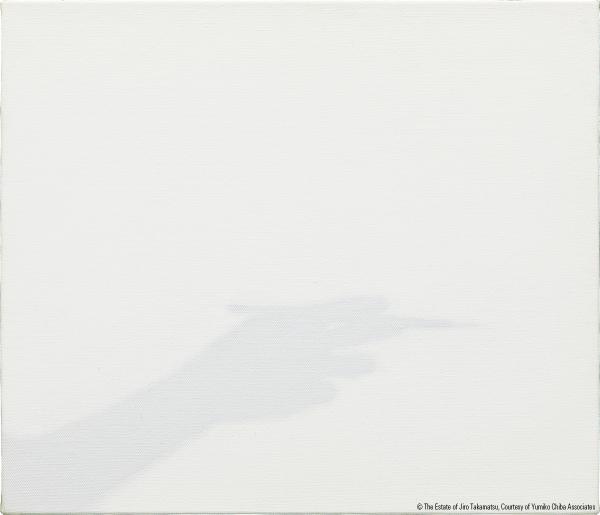